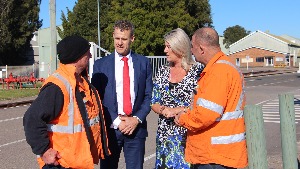 The latest promise from Premier Gladys Berejiklian to make NSW the capital of manufacturing in Australia is nothing but rank hypocrisy after eight years of the same government sending thousands of manufacturing jobs offshore.

We only have to look at the Liberals track record on supporting manufacturing in NSW. In the Hunter, our new intercity trains have been built in South Korea and our Light Rail vehicles were built in Spain.

Instead of supporting a strong a manufacturing industry in New South Wales, particularly in areas such as the Hunter, Wollongong and Western Sydney, the Liberals and Nationals have been proudly exporting these jobs to other countries.

“While I appreciate the Premier’s ambitious plans to make NSW the manufacturing capital of Australia, it is going to take more than just words to make that happen.”

“Labor has said for years to build them here and I’m glad the Premier is finally jumping on board.”

“The Premier is not to be trusted when it comes to supporting manufacturing jobs.”

“The Hunter was once a hub for manufacturing and can be again - we have the skills, the knowledge and the people who want to do the work.”

“The Premier talks a big game but, with South Korean trains and Spanish light rail vehicles, her track record is abysmal.”

“Actions speak louder than words and the Premier needs to walk the walk by sending key contracts back to the Hunter, where they belong.”