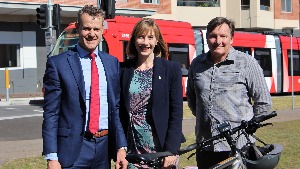 The Shadow Minister for Active Transport, Jo Haylen MP today joined State Member for Newcastle, Tim Crakanthorp MP in condemning the State Government’s failure to invest in cycleways and act to ensure the safety of cyclists in Newcastle.

This follows a number of accidents that have already occurred in Newcastle this year, including the death of a 51-year-old man who was attempting to ride across newly installed light rail tracks.

The lack of adequate safety measures for cyclists, including overtaking lanes and clear signage, have also contributed to the growing safety risks posed to cyclists riding in Newcastle.

Of the $15.1 billion allocated to new transport capital expenditure in the most recent NSW Budget, only 0.38% or $57 million will be invested in new walking and cycling infrastructure projects.

“The Liberal Government cannot continue to ignore the multitude of accidents, including a fatal accident, since the opening of the new Newcastle Light Rail.

“While Andrew Constance is busy trumpeting the imminent opening of the new Sydney Light Rail, he is ignoring what is happening here in Newcastle – dozens of accidents resulting in abrasions, broken bones and a fatality.

“If this Government is serious about encouraging people to walk and ride around our cities, they must make this safe and accessible.

“To make it safe for everyone to walk and cycle, and help beat congestion, the NSW Government needs to invest now in separated dedicated cycleways and walking infrastructure.”

“This Government has been told time and time again that the Newcastle CBD is dangerous for cyclists.

‘The fact that the Government spent $700 million on a transport project in the Newcastle CBD and failed to make any provisions for active transport is absurd.”

“They promised $330 million of active transport funding over five years at the state election and Newcastle deserves its fair share to address the missing cycleway links in the CBD.

“How many more people have to get hurt before something is done?

“Once again, the Berejiklian-Barilaro Government is letting the people of Newcastle down.”