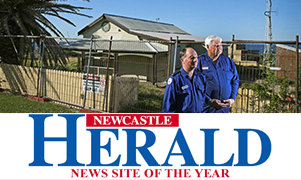 MARINE Rescue Newcastle say they are tired of waiting for answers on the future of Shepherds Hill Cottage, as two years of inaction on the historic building’s repair leaves tempers flaring.

The state government has made no decision on a draft conservation management plan, which was commissioned by the council last year, despite receiving the report in January.

The delay has frustrated members of Marine Rescue Newcastle – the volunteer group who were forced to leave the cottage after damage caused by the April 2015 super storm. The group has been monitoring their radios from a temporary building lent to it by the Newcastle Coal Infrastructure Group on Kooragang Island.