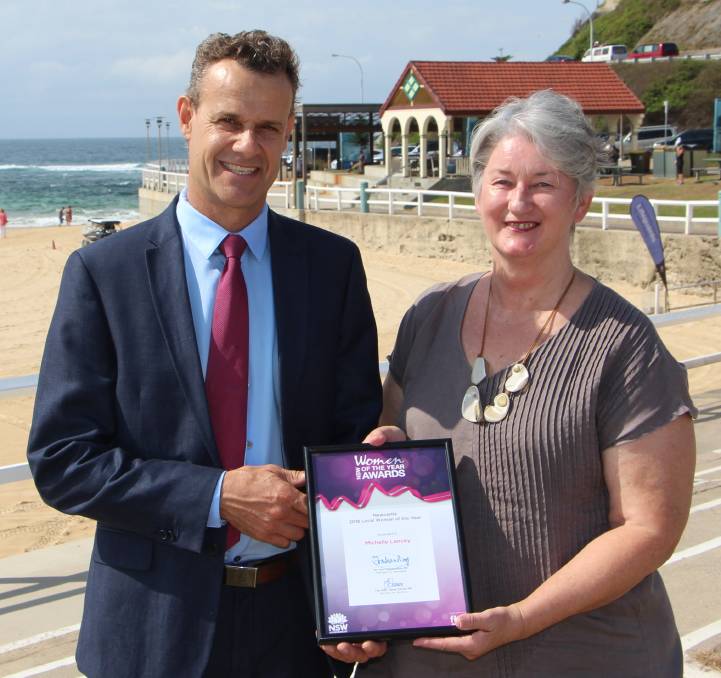 MICHELLE LANCEY NAMED AS 2018 LOCAL WOMAN OF THE YEAR

Member for Newcastle, Tim Crakanthorp, has announced Michelle Lancey as the 2018 Newcastle Local Woman of the Year.

Michelle is the founder of the Newcastle Parents and Friends of Lesbians And Gays (PFLAG) and was a strong activist in the marriage equality campaign.

Michelle’s son came out in 2001 and this led her to focus on LGBTQI equality issues. She created the Newcastle branch of PFLAG after seeing an episode of Australian Story featuring Shelly Argent, a prominent advocate for LGBTQI rights and the national spokesperson for PFLAG.

PFLAG is a non-profit voluntary organisation whose members have a common goal of keeping families together. They help, support and inform families and friends of all LGBTQI people and LGBTQI people themselves.

Michelle worked tirelessly in the marriage equality ‘Yes’ campaign where she collaborated with local support groups such as the AIDS Council of New South Wales (ACON), Rainbow Families and the Queer Collective. She helped organise events including the ‘YESfest’ picnic as a show of support for the LGBTIQ community during the postal vote campaign.

Michelle has also lobbied State and Federal Parliamentarians for LGBTQI legal rights, marched with PFLAG at Mardi Gras, spoken in favor of marriage equality at conferences and appeared in Airbnb advertisements urging the Australian public to support the ‘Yes’ campaign.

Michelle continues to work with PFLAG and will now advocate for change in regards to levels of domestic violence in the LGBTQI community.

The Woman of the Year Awards showcase inspirational stories of dedication and extraordinary achievement by formally recognising and celebrating the outstanding contributions and achievements of women in NSW. The Awards are run by Women NSW.

Quotes attributable to Member for Newcastle, Tim Crakanthorp
“I am so proud to have Michelle as our 2018 Newcastle Local Woman of the Year. “

“Michelle has been a strong advocate for the LGBTQI community. Last year Newcastle proved that they also support this community with almost 75 per cent ‘Yes’ vote in the marriage equality postal vote.”

“Michelle is an inspirational woman who fights for equality and social justice. I look forward to seeing what she will tackle next.”