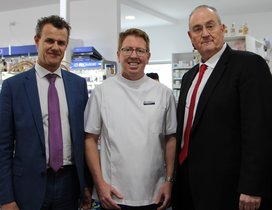 A Foley Labor Government will increase the range of vaccinations available through pharmacies – further protecting the community.

Under the plan, from September 1 2019, NSW pharmacies will be able to provide vaccinations for:

This will bring NSW into line with South Australia, Queensland and the Northern Territory. It is in addition to the current regime where qualified pharmacies are able to provide influenza vaccinations.

Shadow Health Minister Walt Secord and State Labor Member for Newcastle Tim Crakanthorp visited a local Newcastle pharmacy to make the announcement. They made the official announcement at Piggotts Pharmacy on Glebe Road in Hamilton South.

The vaccinations are provided by trained community pharmacists.

Last year was one of the worst years in recent memory for influenza in Australia. In NSW, there were 128,000 confirmed cases of influenza and more than 650 people died. However, figures are lower this year, but the height of the flu season is still ahead.

The pharmacy-led vaccinations in NSW have been a success. A NSW analysis found that 15 per cent of those seeking vaccinations in pharmacies had never received one before.  Forty-three per cent of vaccine recipients were in the 18 to 49 year age group.

The age limit from pharmacy vaccinations will remain at 18.

Pharmacists who are qualified to administer vaccines must complete an accredited training course to administer the vaccinations and have a current certificate in first aid, CPR and responding to anaphylaxis.

NSW has been one of the most conservative jurisdictions in Australia on expanding vaccinations into pharmacies.

Overall Australia lags behind a number of comparable nations in regard to pharmacy-led vaccinations including the United States and the United Kingdom, which go as far as undertaking travel vaccinations like cholera, hepatitis, polio, typhoid and encephalitis.

It would complement the current vaccination programs, reaching people who do not normally have vaccinations.

"NSW Labor is proud to have supported the original proposal of vaccinations in pharmacies for adults and now we want to see it expanded to other vaccines.”

“Vaccinations are one of the last century’s greatest public health achievements and Labor will always support ways to increase vaccinations in the community.”

“This is about protecting the community. It is also about increasing the general health and welfare in the wider community and reaching out to those who normally do not get vaccinations.”

“This is also about expanding the herd immunity in the community and providing greater protection.”