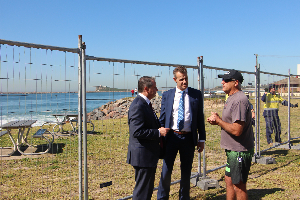 Member for Newcastle Tim Crakanthorp and Shadow Minister for Local Government Greg Warren have called on the NSW Government to urgently intervene and expedite a coastal management program for Stockton Beach.

Mr Crakanthorp and Mr Warren met with locals on Wednesday, less than 24 hours after the situation reached crisis point when the town’s only childcare centre was permanently closed after the building was deemed unsafe due to continued coastal erosion.

At the same time Council workers were moving an exclusion zone significantly closer to the road, with recent erosion now coming within metres of the childcare centre’s back door.

Last August Mr Crakanthorp collected 10,000 signatures on a petition and debated the issue in NSW Parliament. He had also invited the previous minister, Gabrielle Upton, to visit Stockton several times, and has met with the new responsible minister, Shelley Hancock, to highlight the significance of the issue and extend the same invitation.

The Government needs to come to the table with money and resources to assist the City of Newcastle to fast-track the development of their coastal management program.

“It’s disgraceful that the NSW Liberals and Nationals continue to drag their feet regarding this urgent and serious issue.

“Erosion at Stockton Beach has now forced the closure of Stockton’s only childcare centre. That has created chaos for local parents and their children.

“What more needs to happen for this Government to take this issue seriously?”

“To see the childcare centre be forced to close its doors is devastating for local families who now have to make alternate arrangements. It should never have got to this stage.

“After I received the news about the childcare centre I asked Greg to come have a look and he jumped at the opportunity, but years of invitations to Government ministers have declined.

“The people of Stockton have been abandoned by this Government. We know the Government has money they can spend – they need to spend it."